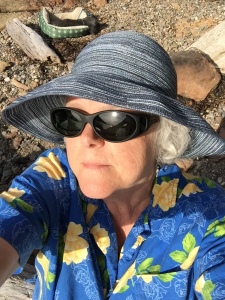 Sometime in 1935 or so, my father moved from North Dakota to Anacortes, Washington. His mother had died and his father had remarried. My Grandfather had taken a job in a plywood mill ‘out west’. My father made a new best friend at school, Bob. They joined the Boy Scouts in a troop led by Vern. During the depression, Vern had purchased a small Island about a mile off shore from Anacortes, in the San Juans. It cost him about $25 at a tax auction, all the cash he had on him that day.

Vern was a single man who never married. He had a facial deformity that made him feel unattractive though to the rest of us it seemed not like something that would have prevented a woman from wishing to date him or marry him. However, he was single. He became a dedicated Scout Master. My Dad and Bob joined his troop. The Boy Scouts went over to the Island in row boats and canoes. 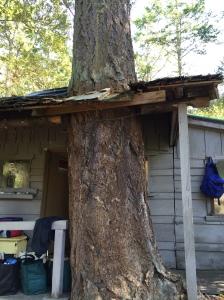 They built a small cabin there, hauling supplies over in small boats. Dad and Bob LOVED the Island. They graduated from high school, went in to the Navy, came home and went to University and eventually met the women who would become their wives. Bob and his wife honeymooned on the Island. Dad and Bob had an annual poker week-end at the Island every year in May. Every Year!

When I was about 10, Dad and Bob were offered the opportunity to purchase the Island. Dad and Bob had stayed in touch with Vern all these years. They had taken our families up there for day trips. As Vern approached retirement, he realized he would not be able to keep up with trip over there. He had promised my Dad and Bob that he would give them first choice to purchase the Island if he ever sold it. Of course they took him up on it!

Thus began many trips to the Island. My Dad and Bob purchased a boat to share. The moms outfitted our families for trips to the Island. My mom covered cardboard boxes with contact paper and labelled them with our names. Going to the Island meant a lot of work for the parents. They had to get us there on a little boat. There was no water or power on the Island, so they had to provide cooking equipment, lanterns and jugs of water. Over the years, some of the equipment was stored there – items like a grill for the beach and other things that we didn’t worry about being stolen. But, for the most part, we didn’t leave anything up there. We stored the boat in a shed at the marina and kept a wood locker bin there for our shared equipment.

When Vern passed away, my parents were given the option to purchase his home. They didn’t move there immediately, but had renters for a few years until my father retired. They remodeled the home, adding a second story bedroom which had a view of the Island. My father’s dream! Either be on the Island, or be able to wake up, see it first thing. Boy did he love that! Interestingly enough, it was not my mother’s dream, nor was it her favorite thing to do. It was work for her, to plan meals over there, do without running water or flush toilets… And yet, all things considered, the work required to go over there was certainly equal – prep and maintenance of the boat, chopping wood, maintaining the cabin. Dad loved it. Mom tolerated it.

There were other vacations for us growing up. In addition to going to the Island, we hiked portions of the Pacific Crest Trail, camped in state and national parks and spent time from places as far north as Penticton, BC, to Mexico. But, most of our vacation time was at the Island.

My husband and I got together in 1972. Soon after, we purchased our own boat. Dad and Bob didn’t let “the kids” use their boat. We went through the same process as my parents, outfitting ourselves for trips to the Island. We stored the boat in the same shed at the marina, bought our own haul out permits and established our own routines. We could have the car loaded on a Friday afternoon, leave our house soon after my husband got home from work, just after 4, and be on the Island, cooking dinner by 6. The two of us loved going over there!

At some point, we began sharing the boat with my brother and his wife. As more of us were going over more often, we began adding structures. My sister and her family also began going over. We built a bunk house with two sides so that several families could easily share the space. We built a new outhouse. We build a new deck on the cabin. We had a storage locker in the bunk house so we could leave much of the equipment. My parents began using a generator. My husband and I still preferred ‘roughing’ it.

We spent a famous Thanksgiving there and invited my parents to come over with us. This was before we had a kiddo. At that point, we had two dogs to add to the gear. 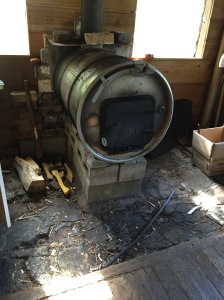 We cooked in a barrel wood stove as well as on a two burner gas stove. For Thanksgiving, we cooked game hens in the wood stove. It was a really wonderful, special day. My husband took my parents back to the Marina at the end of the day and came back over to the Island. During the evening, a storm blew in. A major storm. Our boat was tied up on a line between two sides of a cove. The wind was howling, the tide was extremely high and we worried. We went to look at the boat to see how it was faring. The wind was howling so loudly that we couldn’t even talk to each other. The water was so high it was over the cleat that held the line to the boat. Even if we had wanted to pull the boat closer, we couldn’t reach it. We finally went to bed, saying if the boat was there in the morning, well, we’d be able to leave…

Lo and behold, the boat was still tied between the two sides of the cove! 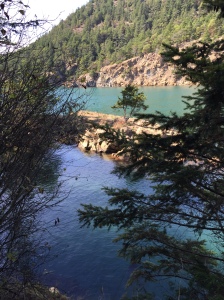 The storm continued to rage and the waves were huge! But! It was daylight, and things look better in the day. We loaded up our gear and the dogs and made our way to and onto the boat. We left the Island, heading for the marina, which though far away, was visible to us. What normally would take 15 minutes or so, took well over an hour. The swells were 10 feet high. Our motor barely made headway. We hung toward the shore of another island and finally made it to the marina. My father was down on the dock, waiting for us! He had followed our movements with a telescope at home, then binoculars from the dock. I don’t think we were ever so glad to have him watching over us! You know, this was before cell phones, sometime in the late 70’s. We had certainly loved our simple, rustic Thanksgiving dinner, but vowed never to go over again that late in the fall. That was to be not only the first, but the last time we had Thanksgiving on the Island.

Get To Know Mama Heidi

I go by several names, but one I've been given that is an honor to me is Mama Heidi. Comes with age. I'm a Pacific Northwest gal, living on 5 acres with my husband, 2 cats, and my daughter and her partner's family, in and out of the house. I taught and then ran an independent school for more than 30 years. I retired in 2015 and don't know how I found time to work.

My family is close by and I have a large circle of friends who discuss politics, religion, cooking, parenting,crafting, books and everything else under the sun. Different moods, different passions. Join me for coffee and stories.

Growing older is inevitable. Growing up is optional.

I love a good cup of coffee shared with a friend.

Bringing peace to the world, one song at a time

Traveling around the world as far as I can go.

lemolodesign.wordpress.com/
TALES FROM THE MOTHERLAND

Straight up with a twist– Because life is too short to be subtle!

The latest news on WordPress.com and the WordPress community.